Events in the Italian Department

This dialogue will focus on Carofiglio’s novels, his career path from an anti-Mafia prosecutor to a full-time writer, his inspiration, his thoughts about the passing of time, and his ideas of truth and justice as well as the role of humanities in personal and professional education.

For more details (and to RSVP for this event), we encourage you to view the full description here: https://madmimi.com/p/ca4b031

Italian Inclusivity Discussion with Prof. Francesca Calamita from the University of Virginia – Oct. 19, 2021

This week Prof. Francesca Calamita from the University of Virginia joined the students of ITAL 231: Topics in Contemporary Italy for a discussion on the continuing efforts to make the Italian language more inclusive of women and nonbinary people. She also discussed how learning a language can help create a new generation of students engaged in social justice, gender equality and inclusion.
Thank you Prof. Calamita for an insightful talk!

This week, in our Italian Translation, taught by Prof. Melucci, we had the pleasure to host a Zoom event with Prof. Sergio Portelli, Head of Department of Translation, Terminology and Interpreting Studies at the University of Malta.

Among his extensive work, he edited a volume titled Traduttori come mediatori culturali.

Prof. Portelli led a very interesting discussion centered on the “art” of translation and especially on the role of translators as cultural mediators.  It was a fantastic event. Thank you Prof. Portelli!

Thank you to all of our students who participated. We look forward to celebrating you at the end-of-semester Department of Italian ceremony!

Exuberance and dread, attachment and estrangement: in Whereabouts (new window), Jhumpa Lahiri stretches her themes to the limit. Lahiri’s narrator, a woman questioning her place in the world, wavers between stasis and movement, between the need to belong and the refusal to form lasting ties. The city she calls home acts as a companion and interlocutor: traversing the streets around her house, and in parks, piazzas, museums, stores, and coffee bars, she feels less alone.

We follow her to the pool she frequents, and to the train station that leads to her mother, who is mired in her own solitude after her husband’s untimely death. Among those who appear on this woman’s path are colleagues with whom she feels ill at ease, casual acquaintances, and “him,” a shadow who both consoles and unsettles her. Until one day at the sea, both overwhelmed and replenished by the sun’s vital heat, her perspective will abruptly change.

Lahiri will be in conversation with Anna De Fina, Professor of Italian Language and Linguistics in the Italian Department and affiliated faculty with the Linguistics Department at Georgetown University. Her interests and publications focus on discourse and migration, identity, narrative and super diversity. She has published many articles on these topics and 10 volumes between authored and edited books. Her latest publication is the Cambridge Handbook of Discourse Studies, coedited with Alexandra Georgakopoulou.

Visit this link for information about the 2021 (Virtual) Student-Centered Workshop on Innovative Solutions to Business Challenges Leading to Paid Internships. This annual workshop, sponsored by the Italian Research Institute of Georgetown College, encourages students to engage in collaborative research and problem solving that can lead them to paid internship positions in the participating companies.

On February 25, 2021, in celebration of Black History Month, the Department of Italian, the Department of African American Studies, the Georgetown Humanities Initiative, and the African Studies Program at the Walsh School of Foreign Service hosted Ethiopian-American award-winning novelist Maaza Mengiste, who discussed her most recent novel, The Shadow King, which was shortlisted for the 2020 Booker Prize and was a 2020 LA Times Book Prize Fiction finalist.

Maaza Mengiste is a novelist and essayist whose work examines the individual lives at stake during migration, war, and exile, and considers the intersections of photography and violence. Her second novel, The Shadow King, called a “lyrical, remarkable new novel” by The New York Times, takes readers to 1935 Ethiopia during the invasion of Mussolini, what many consider the first real conflict of World War II. The novel revolves around an army of ordinary women—since left out of the historical record—who join the front lines to fight the fascists. Salman Rushdie defined The Shadow King as “a brilliant novel…compulsively readable.” Now available in paperback, Mengiste’s novel was named best book of the year by the New York Times, NPR, Elle, and Time.

The event was a lecture by Mengiste, followed by a panel discussion and Q&A session with the audience.

On October, 23, 2020, Professors Louise Hipwell, Fulvia Musti, and Donatella Melucci—in collaboration with the Italian Embassy in Washington, DC and l’Istituto italiano di cultura (the Italian Cultural Institute), as part of the Settimana della lingua italiana (the Week of the Italian Language)—hosted a webinar exemplifying the virtual pedagogical resources that they have employed in their distance-learning Italian language courses. Tools shown included Padlet, Powtoon, Panopto, Google Docs, YouTube, and Kahoot. The demonstrated activities were easily adaptable for Italian language teaching at any level, from K-12 to university courses.

“Elena Ferrante: Time and Identity in the Neapolitan Quartet”

On September 30, 2020, Prof.ssa Laura Benedetti (Georgetown University; Villa Le Balze) and Prof.ssa Tiziana de Rogatis (Università per Stranieri di Siena)—with the support of the Embassy of Italy in Washington, DC and l’Istituto italiano di cultura (the Italian Cultural Institute)—led a discussion around the main themes of language, time, and friendship found within the quartet of novels by this mysterious Italian novelist.

“The Decameron and the Hoyasaxon: Storytelling and the Plague, Yesterday and Today”

On September 21, 2020, Georgetown’s Villa Le Balze held its first virtual event of the semester, hosted by Prof.ssa Laura Benedetti (Georgetown University; Villa Le Balze) and her students. Inspired by Boccaccio’s Decameron, a collection of ten stories set during the time of the Plague, students shared their own modern-day versions of these stories in the context of COVID-19.

February 7, 2019 — Botticelli’s Secret: The Lost Drawings and the Discovery of the Renaissance 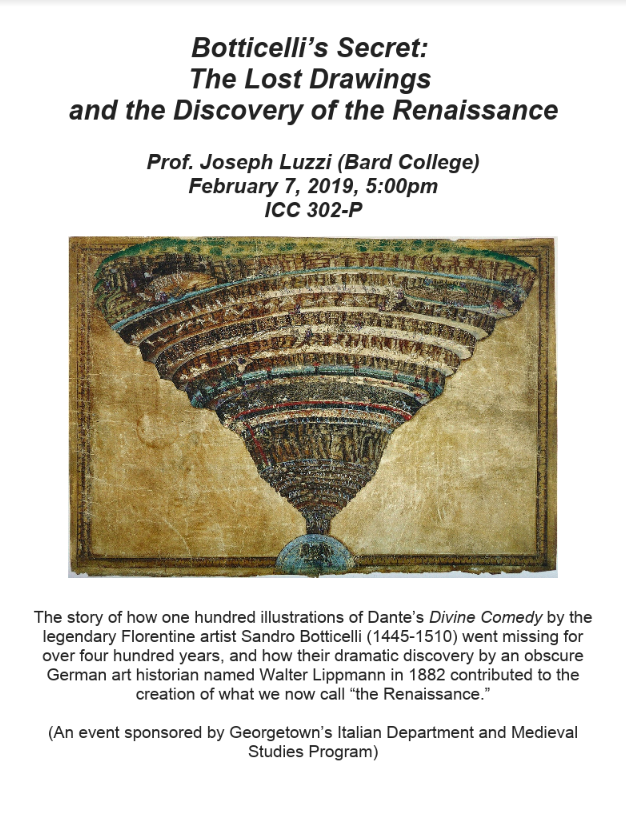 Keeping Up-to-Date with the Department